Following the evaluation of several options we chose a servo hydraulic drive of the press. This solution, due to its dynamics, is most suitable for the required performance range. Moreover, the use of various cylinder sizes allows to realise test forces from 1kN to 1,000kN.

The main component is the servo cylinder with hydrostatic pocket bearing. These cylinders are used for component tests, in material testing machines and in all fields where highest dynamics and accuracy are required. 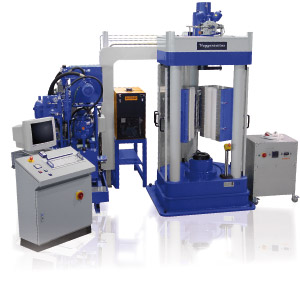 The advantages of a hydrostatic bearing, even with the test force being superimposed with a sinusoidal oscillation, include:

A hydraulic cylinder with a conventional sealing is not suitable for this type of application as an oscillation with low amplitude would cause the sealings to immediately wear out. Furthermore, the servo cylinder is equipped with an integrated, high-precision path-measuring system. In addition, the servo valve is mounted directly to the cylinder and, therefore, also contributes to the high rigidity and accuracy of the system.

The cylinder is designed as a homokinetic cylinder allowing to run compression and tensile tests with a maximum test force of +/- 300kN. When superimposing the test force with a sinusoidal oscillation we still obtained clear sine waves from 0.1 Hz to 20 Hz. Test force, force amplitude and frequency were preset during the tests. The path amplitude was determined. Likewise, if the test force, path amplitude and frequency are preset, the force amplitude can be determined.

Naturally, the results that can be reached in the field also depend on the material of the test piece.

The operation of the press and the programming of the process curves and the graphical display of the command-value and actual-value curves can be controlled through a LabView application running on a commercial PC.

By using different cylinder sizes and adaptation of mechanical components the press can be supplied for test forces ranging from 1kN to 1,000kN.