The pictures show the so-called Walker-type multi-anvil module. When Walker was searching for technologies to carry out syntheses at high pressures / high temperatures with sample volumes as large as possible and at moderate cost to research new materials, he defined this tool at the University of Cambridge in 1990. In 1998, an improved version of the tool with a load capacity of up to 8MN was produced at the Bavarian Research Institute of Experimental Geochemistry and Geophysics in Bayreuth based on the data defined by Walker. In cooperation with the LMU university in Munich, further improvements were made in 1999; for example, the load capacity was increased to 10MN and the first tool in the design still used today was produced at Max Voggenreiter GmbH. 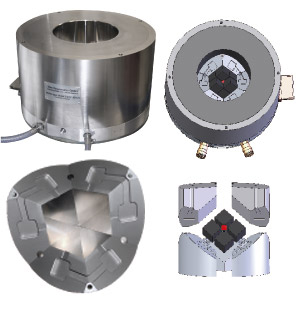 It is possible to achieve pressures of up to 25 GPa (250,000 bar) and temperatures of up to 2,500°C in the interior of the sample (the area marked in red in fig. 2). This technology is mainly used for research into earthquakes and volcanoes, mineralogy, physics, chemistry and super-hard materials.

Today, Walker-type multi-anvil modules are in use at several research institutions, these include: Max Planck Institute for Solid State Research in Stuttgart, physics department of the Johann Wolfgang Goethe University in Frankfurt, Max Planck Institute for Chemical Physics of Solids in Dresden, GFZ German Research Centre for Geosciences in Potsdam, Istituto Nazionale di Geofisica e Vulcanologia Rome (Italy), Stockholm University, University of Edinburgh and Institute of Mineralogy and Petrography at the University of Innsbruck.

The abbreviation "DIA" stands for diamond because the DIA tool geometry was used when a diamond was synthesized for the first time at ASEA (ASEA = Allmänna Svenska Elektriska Aktiebolaget) in Sweden in February 1953. We received the order to design and produce a tool on the basis of this principle from the GFZ (German Research Centre for Geosciences in Potsdam). The DIA6 multi-anvil module has been designed to withstand a load of 17,5MN and is now in operation in a Voggenreiter press at the DESY (German Electron Synchrotron) in Hamburg.

The design of this tool makes it possible to penetrate the sample with a synchrotron beam and thus examine it in situ, i. e. during the heating and compression process. Pressures of up to 25 GPa (250,000 bar) and temperatures of up to 2,000°C are reached in the interior of the sample. Total weight of the tool: 2,500 kg.

Another type of design is the piston-cylinder module shown below. It is operated in specifically designed presses with two pressure cylinders. A pre-tension cylinder acting from above seals the complete tool structure with cooling system.

The working cylinder itself, which has a high-precision pressure control system, acts onto the sample from below with a hard-metal plunger. The pre-tension device helps to achieve proper sealing and cooling of the system. An application area for this module, as for the belt module, is basic research in physics, chemistry and geology.

The figures in the column on the right show various designs of the belt and piston-cylinder modules. The designation "belt" derives from the tool construction. The hard-metal mould in the centre is pre-tensioned by several "belts" in order to accommodate the high pressures. The hardness of the materials used decreases from the centre outwards. The outer ring is often also used as a cooling jacket. The two plungers are also made of hard metal. This module is used in basic research in physics, chemistry and geology. 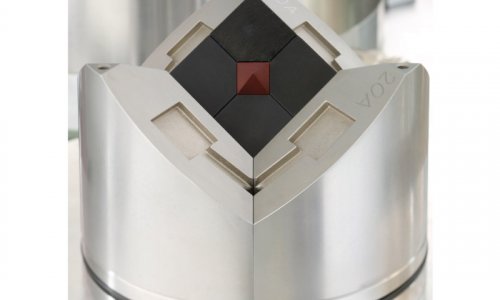 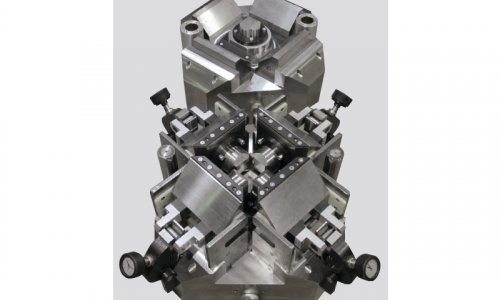 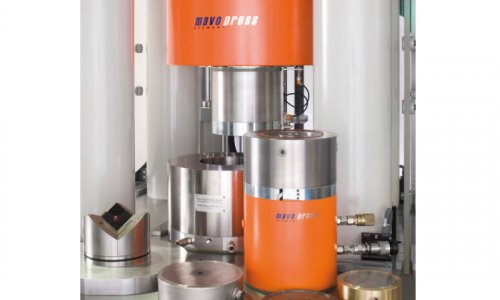